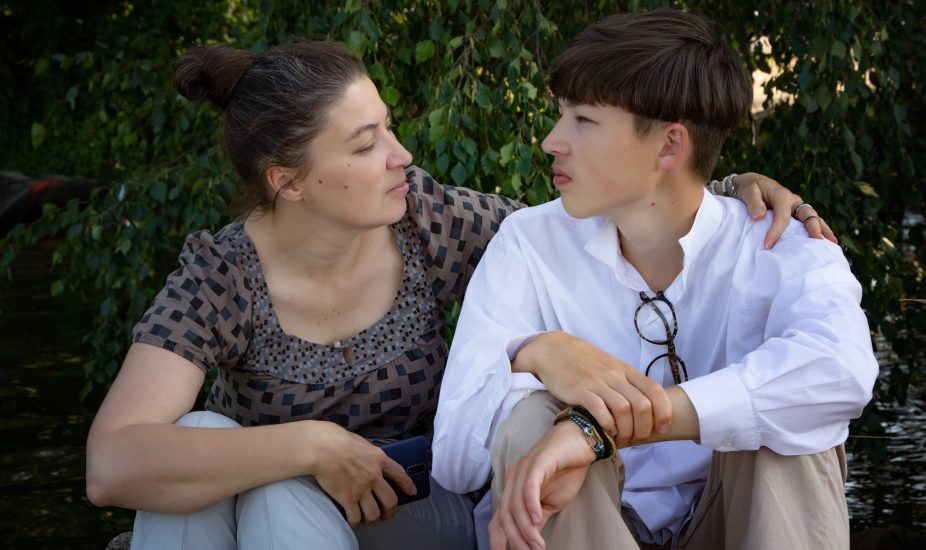 Underage drinking – How many times should we discuss it?

Most kids grow up and never see drug use up close. Sure, they hear references on television shows and movies, they might even hear about relatives or neighbors who’ve abused drugs, but by and large it’s something that happens ‘out there’.

Alcohol consumption is quite different.

Most kids grow up seeing adult role models who drink, so how do we help them navigate healthy choices when they get mixed messages?

On top of that, teens are more prone to engaging in risky behaviors. Their brains aren’t fully developed, they have a unique thirst for dopamine, and they crave acceptance from their peers.

To make it even worse, alcohol is easily the most accessible substance — way more than illicit drugs. And, it is socially acceptable for adults to drink. It’s a normalized behavior.

A common view is that youth drinking is the norm, but most young people actually do not drink.

When their desire to fit in overrides their caution or personal values, they can make life-altering decisions with substances without realizing what they’re doing. We can intervene and educate them so they’re able to see clearly and make wiser choices. Studies have shown that when teens realize that not as many of their peers engage in substance use as they thought, fewer of them will use substances.

If we can correct misperceptions and misinformation, our kids will be better off. If we can offer to them positive and aspirational examples of people who are deemed ‘cool’ and lead remarkably healthy, clean, lifestyles — and deliberately point that out to kids — then we can actually alter their normal instinctual habits.

Learn more about social norms and how to prevent alcohol use in teens here. 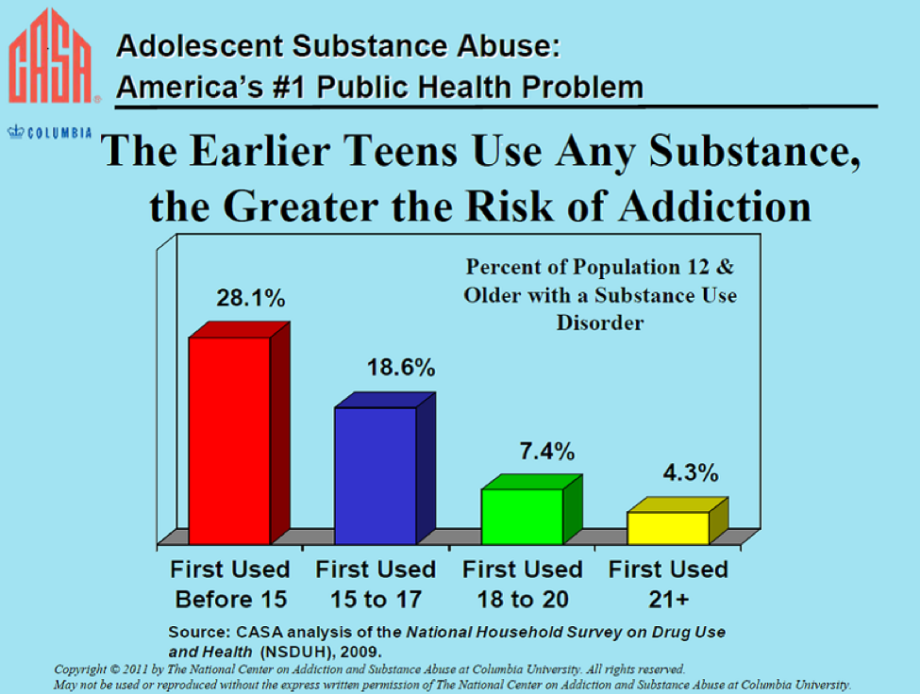 As you can see in the graph above, the risk of addiction greatly decreases as a young person ages. The longer a kid waits to try alcohol, the less likely they are to develop a substance use addiction later in life.

Important things to know about teens and alcohol use:

Set the expectation with your child that there will be no alcohol use.

Some parents or caregivers believe that it is better to teach their children to drink responsibly or in moderation than to have clear rules against underage drinking.

Many feel that, as long as their child doesn’t drink and drive, some alcohol use before the age of 21 is to be expected and is not a big deal.

Beliefs like these are understandable, but are not supported by a growing body of research. This evidence increasingly points to the specific harms of any alcohol use prior to adulthood.

Indeed, numerous studies have shown that kids whose parents let them drink before they reach the legal age of 21 are, on average, more likely to drink in riskier ways and experience future alcohol-related problems than kids whose parents do not permit any underage drinking.

The dangers of alcohol use are clear and need to be discussed with our kids. The question then becomes: how and when do we discuss the dangers of underage drinking?

The answer: probably more often than you think!

Years of prevention research has proven that kids who have an ongoing series of discussions with their parents, especially during the middle school years, have the strongest likelihood of making wise choices regarding substances for the rest of their lives.

Too often, though, this goes overlooked. Parents get busy. Kids pull away, which is natural and normal adolescent development. They also have a clear goal to figure out life for themselves and often shut down when someone else, especially an adult, tells them what to do.

More than anything, most parents aren’t aware of this important fact — the more you initiate and engage your kids in thoughtful discussions about the dangers of harmful substances, the better off they will be.

Every kid who has a conversation about drugs and alcohol with their parents is better off. Better still if there are a series of ongoing discussions over the years.

But there’s one important caveat to these important interactions — they need to be interactions. No lectures or monologues — they have to be dialogues and conversations. Text messages don’t count, and neither do notes in their lunch bag.

The next important part is figuring out which conversations to have. That’s why we put together a handy (free) resource guide, The 8 Must-Have Conversations to Have With Your Kid About Drugs & Alcohol. 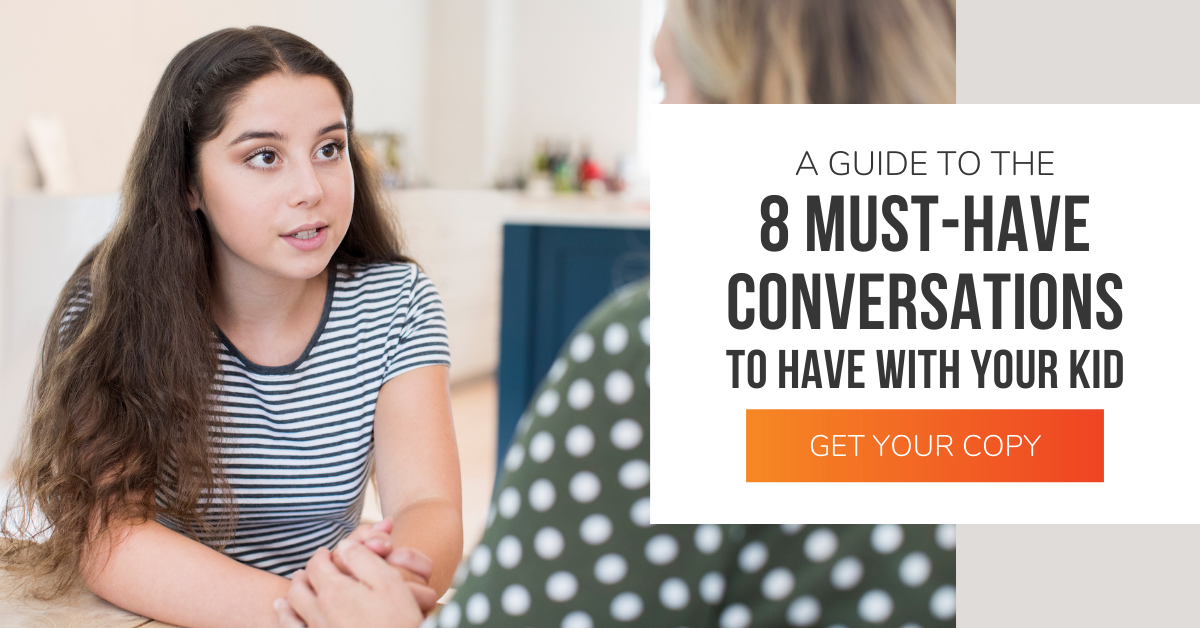 Finally, it’s critical to help your kids manage the dangerous scenarios they’ll likely find themselves in by helping them have clear boundaries and expectations. As much as teens grate against the rules, restrictions, and boundaries adults set for them — they still need them.

They aren’t wise enough (yet) to make the best choices for themselves. They lack the context, life experience, and ability to see how their current choices will affect them in the future.

There is a neurobiological framework supporting the notion that executive functions, which include decision-making, likely continue to improve with continued brain development. This decision-making capacity includes being able to make safe choices about frequency and quantity of alcohol use, regardless of drinking experience.

Adolescence is such a critical phase in brain development that the actions of alcohol and other drugs on the brain can be assumed to have a particularly profound impact during this developmental period.

They need help in the form of guidance and especially through boundaries and guardrails we set for them. That’s our responsibility. We need to continue operating as their brake as they push down the gas pedal.

In fact, even though they roll their eyes and argue at every turn, they know deep down that the restrictions we set for them express our love and concern for them. Kids who have adults in their lives who give them too much freedom too early often develop a deep-seated belief that they aren’t valuable or worthy, and they carry that fundamental belief with them into adulthood.